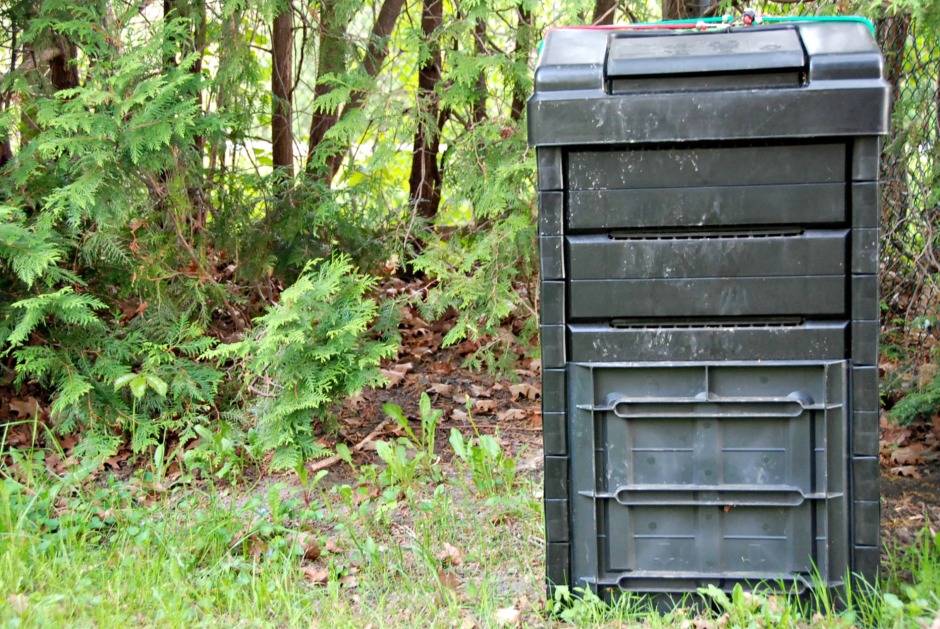 The compost bin has arrived!

I’ve been yearning for a backyard compost bin for years so this is a big thing in my life.

When I lived in an apartment, my friend suggested I put one on my 11th floor concrete balcony. I instead decided to wait until I had my own backyard.

The first house we bought was a cute townhouse with a backyard the size of a large swimming pool. It was in the middle of a suburban neighbourhood that managed to successfully ban clothes lines for a number of years. (That ban was finally overturned in 2008.)

A neighbourhood that fights against line drying isn’t going to be receptive to composting and I didn’t want to ruffle the feathers of the other homeowners.

Plus, we bought this home knowing that it was going to be a short term purchase.

Faced with three options, the choice was easy: move a big pile of rotting food, leave it for whomever buys our home or hold off on backyard composting.

Three years, and two babies, later we sold and moved to our forever home.

But we moved in November so I had to wait until spring.

Thanks in part to having months to scroll through Pinterest, I’d been secretly wanting a rustic DIY compost with two bins made of chicken wire and wood pallets. I could eventually put the chicken coop and bee hive nearby and tether the grass cutting goat on the side yard.

My husband does not share this vision. He’d be happier having nothing to with composting but he humours me.

So I was overjoyed when he went to the hardware store and picked up a compost bin.

It’s not the one from my Pinterest boards but it’s made from one hundred per cent recycled material so it’s okay by me. Compromise.

I assembled it and put it in the most compost friendly spot in the yard. It’s sunny and accessible and far away from our only adjacent neighbours.

I followed the instructions and layered twigs on the bottom to help with aeration. I then put a layer of “brown” or “dry” material, so mostly leaves. Then I layered the “green” or “wet” material, that’s where food stuff comes in.

It’s pretty basic actually. We stick with the basics and only put fruit, vegetables, eggs and coffee grinds in the bin. I’m really good at the coffee grinds. Next year’s tomatoes are going to be coffee flavoured.

It’s surprisingly clean and totally odourless. It doesn’t even smell like coffee.

Despite our new found backyard composting ways, we are continuing with the city run composting program. We’ve been participating for a few years and it’s great. It takes items that are discouraged in our backyard compost: meat, oil, dairy, weeds and questionable leftovers.

We’ve been surprised by the amount of nighttime visitors our backyard receives. The local wildlife, probably raccoons, was getting the lid off the bin. I know that raccoon are clever but are they really able to lift the lid off that’s more than three feet off the ground? We must have really tall raccoons.

An impressive feat no doubt but not one that can be a regular occurrence. What raccoons don’t know is that we have an arsenal of bungee cord so I McGuyvered the lid and haven’t had an issues since.

With the pests at bay and the new routine of two separate compost bins figured out, all I have to do is wait until the old food turns to dirt. And dream about chicken coops and bee hives.

2 thoughts on “Composting for Dummies”